Flight of Horace by Mohammed Shamma is licensed under a Creative Commons Attribution-NonCommercial-NoDerivatives 4.0 International License.
Based on a work at flightofhorace.com.

My story begins when I stood upon that bridge and gave in to deception.
Desire for immortality outbid any veneration I had for the past and future.
A single leap of faith would rid me of my fleshy pain.
I would pass over that Golden Gate parting ways with sin and sorrow.
With open arms, I would greet eternity.
Yet my soul was displeased with me and had other plans.

On this page, Horace, the narrator, is taking the reader back to the moment when he chose to jump off the bridge. Horace’s soul (his ba) is shown as a bird hovering next to him.  See “ba” reference on this page for more information on the ancient Egyptian concept of the soul. The onlookers are based on the mourners painted on the walls of the Tomb of Ramose.

A Single Leap of Faith

I’ve recently redesigned this page the give it a more Egyptian “Book of the Dead” look and feel and less like that of a comic book.  Some of these elements include the landscape format, text and page framing with bold black lines and text panels that have one side open onto the subject. 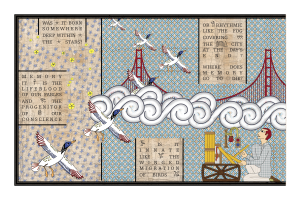 Flight of Horace by Mohammed Shamma is licensed under a Creative Commons Attribution-NonCommercial-NoDerivatives 4.0 International License.
Based on a work at flightofhorace.com.

“Memory – it is the lifeblood of our fables and the progenitor of our conscience.  Was it born somewhere deep within the stars? Is it innate like the winged migration of birds or rhythmic like the fog covering the city at the day’s end? Where does memory go to die?”

Horace is narrating these words while seated in a typical scribe pose (as seen in the Tomb of Ti in Saqqara).  The stars on the left show the Orion constellation embedded into the commonly found star pattern on the ceilings of Egyptian tombs.  I drew the flying duck from the hunting scene on the walls of the Tomb of Nakht.  The fog clouds were based on various spiral patterns often scene in tombs of Tell el Amarna, Theban tombs and Saqqara

Memory is the Lifeblood of our Fables